Lila* was a stocky girl from the poor side of town. Shy and a loner, she made the perfect target, especially for Heather*.

After months of tormenting Lila with minor pranks and hateful remarks, Heather and her clique followed Lila from their high school. When Lila neared the corner of a busy street, Heather and the others shoved Lila into oncoming traffic. 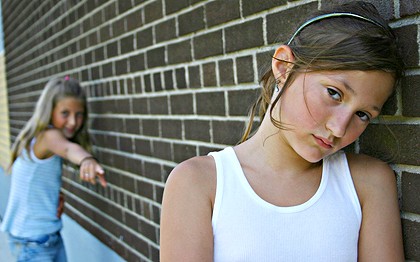 Lila managed to shift so that the nearest car didn’t hit her. She swung around, using her backpack as a counterweight to regain her balance. Because they stood right behind her, Lila’s backpack hit each girl in the face. It was an accident, but it also saved Lila. Because the girls were distracted by their bloody lips, Lila was able to escape and run to safety.

Lila wasn’t harmed, at least physically. But she was terrified. Worse, after the incident, the two families had a meeting. Lila was partially blamed by her own parents for the traffic incident, despite the testimony of witnesses. Lila’s parents refused to stand up for their own daughter because Heather was from a prominent family. A local conflict with Heather’s family might have ruined Lila’s parent’s business.

Because no one intervened on Lila’s behalf, she was left to defend herself from Heather’s continued torment. Lila learned to avoid Heather and her friends, but inside, Lila’s emotional wounds took years to heal.

Mentoring a A Bullied Teen

Lila has come a long way since her tormented childhood. As an adult, she has dedicated her life to helping troubled teens overcome difficult situations like bullying. The following are some of the perspectives she shared with me about her experience with bullies:

What are your thoughts on mentoring a teen who has been bullied?

*no real names were used
{linking up here}

Do you have a post that is relevant for moms and mentors seeking to impact the next generation? Feel free to link up below.

Don’t forget to sign up for the next M2B Mentoring Training Course and Study that starts April 8th.

As a former perfectionist, cancer survivor and carpet-cleaning veteran, Jennifer is passionate about sharing the grace of Jesus with women, moms, teens and tweens. Jennifer lives in Texas with her husband of 13 years and two daughters, the younger of whom has autism. Connect with Jennifer on Twitter @JenniferDyer, on her blog at www.jenniferdyer.net, and on her FB page. You can also find her on MomLifeToday.com.

2 thoughts on “Mentoring Monday: Bullies! Perspective Gained from a Victim”