I don’t always believe it.

I don’t always feel it.

I don’t always hear it.

And the worst part is – when I do hear it, I’m often the one saying it.

Too Much and Not Enough

Before I went to college I tacked on not enough to my name.

I carried the words and the names with me through friendship beginnings and endings, good grades and poor grades, and leaving for college. I could have left them behind when I packed up all of my belongings but there they were when I lifted the cardboard lid in an Alabama dorm room. It doesn’t seem to matter where I go, they come along for the ride.

My pants are too tight. Too much.

No one liked or favorited or commented on my social media post. Not enough.

She turned down a coffee date. Again. Too much.

I received a low grade on a test. Not enough.

She walked away from our friendship. Too much – and not enough.

Sometimes it’s a both/and . . .  not an either/or. We can tell ourselves we are too much of all the wrong things and not enough of all the good stuff and we can spin ourselves silly in circles of performance and we will never ever measure up.

[Tweet “We hold the measuring stick of expectations and we forget that grace doesn’t measure, it moves.”]

Grace moves us to rest in what already is instead of pushing forward to climb one more rung of a never-ending ladder.

[Tweet “Grace moves us to gratitude for the gifts already given.”]

When we move to the rhythms of grace we are caught up in the slow dance of already enough instead of the quick tempo race to be more, less, better, best.

You can line up for the race of doing more and still end up being less. 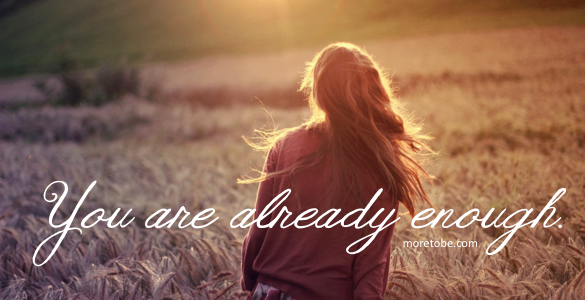 You are already enough.

Just as you are.

There is nothing you could do or un-do or not do that would change the truth.

[Tweet “You can stop comparing your behind-the-scenes to everyone else’s highlight reel.”]

You’re already enough because you’re already hidden in Christ. You are complete in Him and the ocean of grace is bigger than your wildest imaginings. Stop the inner dialogue that you play on repeat. Shut down and shut off the lies. If we’re going to measure anything we’ve got to measure out grace for ourselves.

He is the God of Alreadys, so let’s hold onto His words and let go of the ones we’ve been clinging to.

Let’s stand together and be the Already Generation.

You are already enough. There is nothing more you could do, nothing you could be more of or less of.

Let’s break the measuring sticks and drink from the ocean of grace. Let’s pack up the lies and unpack the truth.

Let’s live like we believe it until we truly do.

Life is not a race to be perfect. It is not a contest to see who deserves the accolades or the titles.

As they say, the ground is level at the foot of the cross. We bring nothing but our dirty selves to Him. There will be no trophies or blog statistics or straight A’s and more than that, we will no longer care about any of it.

They won’t make you any more valuable to Christ.

You can dance in your size 12 jeans and know it all the way deep inside: there is nothing that can make you any more or any less because grace is already yours.

You are already enough

Kaitlyn is a lover of words and crazy about the power of story. She works as a Virtual Assistant for DaySpring, Holley Gerth, Jennifer Dukes Lee and several others. Her first book - Even If Not: Living, Loving, and Learning in the in Between - is for girls who want to find God on every page of their story.