Recently I finished my journey through the book of Acts. It’s amazing to me that no matter how many times I may read something in the Bible, I always get something new out of it. If you haven’t read Acts yet, it is one action-packed book. Luke, the author of this book, compiles many stories of the early church and we also get a different perspective on the lives of Peter and Paul.

The deeper I studied the book of Acts, the more enthralled I became with the stories. Luke gives us several accounts of the disciples performing miracles through the power of the Holy Spirit (Jesus had already been resurrected) and shows various ways people became followers of Jesus. It’s all very exciting to read. 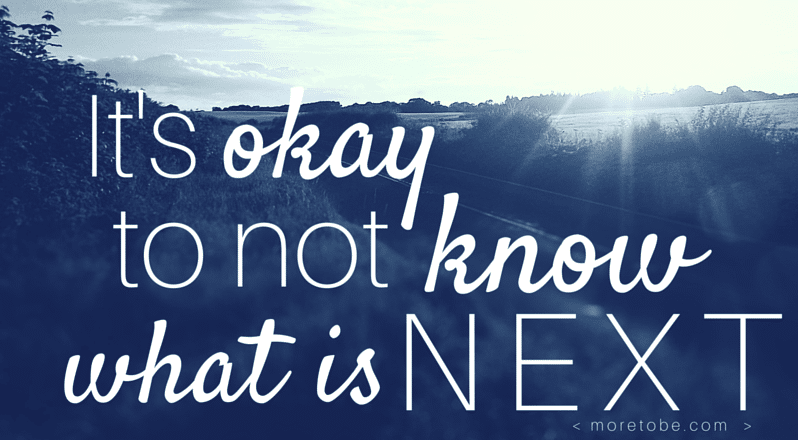 What stood out to me the most, however, was that after reading several stories revolving around a similar theme, I noticed that most of the people God gave an assignment to didn’t have a clue where they would be going next after receiving His instructions. For example, towards the end of Acts 8, we see a story unfolding involving a man named Philip, who was described as a believer and teacher of the word.

As for Philip, an angel of the Lord said to him, “Go south down the desert road that runs from Jerusalem to Gaza.” So he started out, and he met the treasurer of Ethiopia, a eunuch of great authority under the Kandake, the queen of Ethiopia.”

Did you catch that sequence of events? An angel of the Lord told Philip to go from Jerusalem to Gaza. Then, after he started out on his journey, he met a eunuch, an Ethiopian man. The angel only gave Philip the location he was to go to. The angel didn’t say, “Go here and you will meet an Ethiopian man and you are to do this and this.” Philip was given one detail at a time.

The Voice translation describes it this way:

A heavenly messenger brought this short message from the Lord to Philip during his time preaching in Samaria:

“Messenger of the Lord: Leave Samaria. Go south to the Jerusalem-Gaza road.”

The message was especially unusual because this road runs through the middle of uninhabited desert. But Philip got up, left the excitement of Samaria, and did as he was told to do.

He got up, left the excitement, and did as he was told to do.

I just love that.

I can imagine Philip starting his journey to Gaza wondering why in the world he was supposed to go there. But he did as he was told to do. This is where Philip and I differ. I would have probably been like “Um, angel . . .  I need further instructions. I need to know where I will stay, what food they have there, what language I need to know, and also, why are you having me go this way? Everyone knows that’s not the easiest way to go.”

But obedient Philip just did as he was told. So many times we find this in Acts. Someone is given instructions to go somewhere, most likely to preach to the people, but they are given little instruction after that . . . until they reach their destination.

Look what happens in Philip’s story, picking up at verse 27 through 31:

The eunuch had gone to Jerusalem to worship, and he was now returning. Seated in his carriage, he was reading aloud from the book of the prophet Isaiah.

The Holy Spirit said to Philip, “Go over and walk along beside the carriage.”

Philip ran over and heard the man reading from the prophet Isaiah. Philip asked, “Do you understand what you are reading?”

The man replied, “How can I, unless someone instructs me?” And he urged Philip to come up into the carriage and sit with him.

Philip was just handed an invitation to share Jesus with the Ethiopian man. As the story continues, we learn that Philip does just that–shares the gospel of Jesus with this man. The Ethiopian man becomes a believer and Philip ends up baptizing him in some water they come across while walking with the carriage.

For a man who had little clue of where he was going next, he sure was given a big assignment.

So one of the biggest things I learned in my study of Acts is this:

[Tweet “It’s okay to not know where you’re going next. “]

I’m guilty of being the opposite of Philip. I wrestle with God over why he has me doing something a certain way when it’s just easier to do it another way. I so often miss those invitations that he presents to me.

I get restless in my ministry and I start believing I should be farther along than I am. I should be doing more. I should be reaching a wider audience of women. I’m constantly thinking of where I should be going next. But I’m missing the initial call God has given me . . . to simply be obedient.

What happened after Philip followed the Lord’s instructions to leave Samaria and go to Gaza? Once he started his journey, God gave him further instructions in verse 29:

The Holy Spirit said to Philip, “Go over and walk along beside the carriage.”

I love that The Voice translation tells us in verse 27 that Phillip “left the excitement of Samaria.” Sometimes we will get called to leave something behind. That something may be exciting for us. It may be something that brings joy to us. We’re not always called to leave bad things behind. Often times we have to leave behind good things too.

Philip gave up the excitement of the bigger city for something even bigger. He was the passageway for the Ethiopian man to meet Jesus. In return, the Ethiopian man then took the good news he had learned and spread the gospel to others.

Perhaps today you are restless. You are anxious. You are constantly thinking of what lies ahead for you.

[Tweet “It’s okay to not know where you’re going next, if you know The One who goes before you. “]

He will provide more instruction when it is time.

He’s not going to place a call on your life and then leave you high and dry to fill in the gaps yourself.

I want to be obedient like Philip and just go. But my natural response is to wrestle with God. I don’t want to leave my comfy cozy spot. But there is an invitation to experience a life filled with excitement and growth if I can choose to be comfortable in not knowing what’s coming next.

I pray that you can experience that invitation too, friend. May we find the joy in anticipating what’s just around the corner for us. How exciting it can be not knowing what God will call us to next.

Amanda is a women’s ministry leader and Bible study teacher. She is on fire for the Lord and loves ministering to teens and women. She thrives on encouraging women to fall in love with Jesus and is passionate about them discovering their God-given gifts and calling. She especially has a heart for women in leadership and equipping them to serve in God's Kingdom. Amanda lives in North Carolina with her husband and two little girls. Visit Amanda at her blog, Give Her Grace: http://givehergrace.blogspot.com