I stood in the garage next to my car and began to feel sweat trickling down my back. It was the middle of summer, and I had been standing there for a good ten minutes, begging my two year old to sit in his car seat so I could take him to the park. He dug his heels into the bottom of the padded car seat cover and shook his head no. “GWATH!!” He shrieked, over and over.

He wanted to play in the backyard, where the grass was.

His forehead was beaded with sweat and his cheeks were flushing a brighter shade of pink than usual. “Mommy wants to take you to the park!” I tried to explain. “The park, with the swings and the trees! It has a big slide! Don’t you want to go to the fun park?” His response was more shrieking, sweating, and fist clenching. 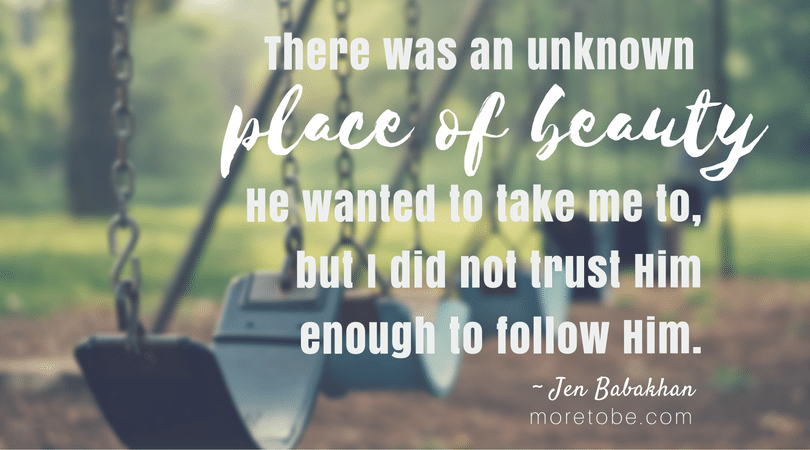 The park I wanted to take him to was beautiful. Filled with mature trees and a play structure that I knew he would love, if only he would allow me take him there.

I was working hard to make the case that the park was much better than our backyard. I needed to get us both out of the house, and if I’m being honest, out of the endless cycle of worry my mind was taking me on. I was trying to decide whether to return to my beloved teaching career after a leave of absence or resign to be a stay at home mom. I knew God was asking me to give up my career, but taking that step felt as though I were taking a flying leap off of a cliff with no parachute. I played the scenario of both returning to work and staying home in my head on an endless loop.

I needed us to go to the park. I needed a change of scenery. I needed to escape the voice in my head that told me I could not expect a positive outcome in pretending not to hear God.

My two year old did not want to hear all of the benefits of the park. He wanted what he had seen, what was known to him. He was not willing to trust that I knew he would enjoy the park more. My legs began to ache as I stood next to the open car door, pleading harder for him to just sit down so we could go.

I heard God whisper to my heart that I was doing the same exact thing. That there was an unknown place of beauty He wanted to take me to, but I did not trust Him enough to follow Him.

I wanted to stay where I was, with what I had known.

[Tweet “The backyard of indecision felt a lot safer than the park of letting go and trusting Him. “]

God had lovingly told me the hard truth, and I was flabbergasted. I knew that I was avoiding making the choice that He had set before me, but I never expected that He would interrupt a tantrum with my toddler to show me how my own faith was lacking. I felt gently corrected, but also deeply loved. Even though my son was trying my patience with his antics, I loved him so deeply nothing could ever shake my devotion to him. And so it is with our Heavenly Father. He would wait for me, patiently.

Stunned by such a sweet moment with Jesus, I took my sweaty little boy out of the car and led him to the backyard. He ran happily over the grass, not knowing what he had missed. The concept of trust was not one that I could explain to him. He couldn’t understand that I knew the park was better, and that I had his best interest at heart. I, however, was old enough to understand what trust meant. And I wanted to go to the park.

Is there something He’s asking you to trust Him with that feels scary? You can lay it at His feet with confidence. He is worthy of your trust.

Jen is a Christian wife, mother (of two little boys), and author. She is currently writing her first book, Detoured: The Messy Grace-Filled Journey From Working Professional to Stay at Home Mom, to be released in 2019 with Harvest House Publishers. She's also a contributor for Reader's Digest. You can find her at www.JenBabakhan.com. You can find her on social media here: Facebook, @JenBabakhanauthor, Instagram (her favorite of all things social media!) @jenbabakhan, and on Twitter @jenbabakhan.

2 thoughts on “He Wants To Take You To the Park”